If you can't install or update Niagara Launcher, there may be multiple reasons for that.

Niagara is Already Installed And Updating Through Google Play Fails

You may have installed Niagara from an external, untrusted source. Usually, you can still install updates from Google Play even if you previously side-loaded Niagara Launcher with an APK (e.g., a beta build from our news channels).
However, if you installed a modded or otherwise modified version, consecutive updates will fail. In that case, we recommend uninstalling Niagara Launcher and reinstalling it from a trusted source.

Niagara is Already Installed, And an Official APK File Cannot be Installed 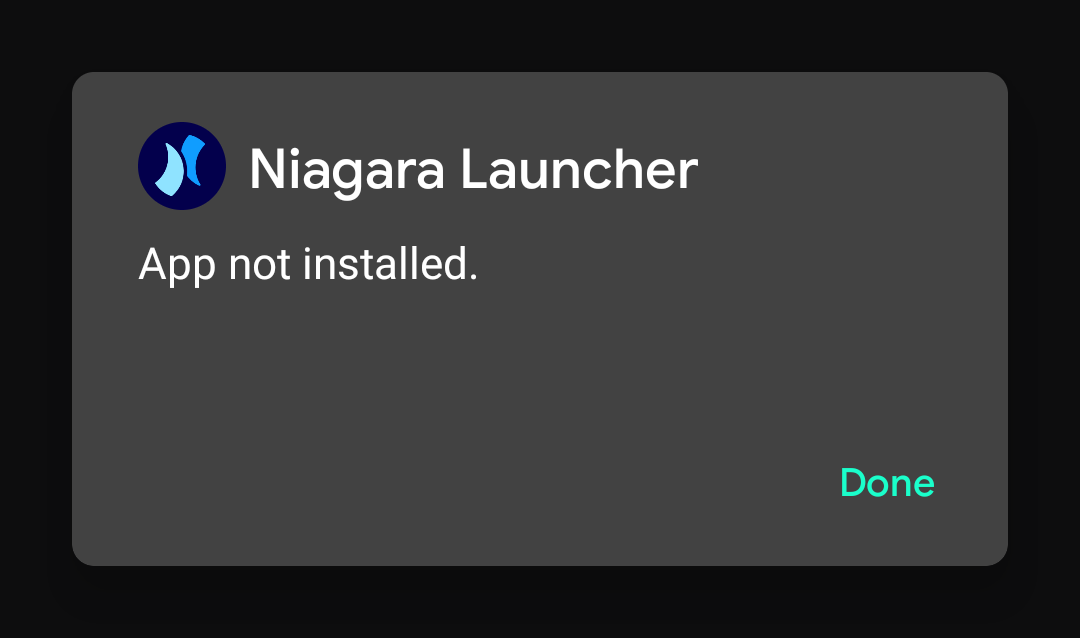 As described in the section above, installing Niagara over a modified version won't work. If you're confident that you only downloaded Niagara from official sources before, make sure the version number of the file you're trying to install isn't lower than the already installed version. For safety and security reasons, Android doesn't permit downgrading installed apps.

If you really need to downgrade to an older build, you'll again have to uninstall Niagara Launcher before doing that. However, please note that we recommend always installing the latest stable version of Niagara Launcher.
If you want to downgrade from a beta build because of a bug, consider filing a bug report for the issue you have. Thanks!

Niagara is Not Installed, But I Can't Install it Through Google Play Nor With an APK

You probably had Niagara installed before, but it wasn't fully removed when you uninstalled it. We haven't found a reason for this yet, but assume it's a system issue related to the Android 10 feature that allows you to retain application data on removal.
Unfortunately, the workaround to fix the problem is somewhat complicated, but the only solution apart from resetting your device to factory defaults.

To install Niagara again, you need to remove Niagara Launcher from the device completely. For that, you need to use adb, the official Android debugging tool from Google. It has to be installed on your PC, for which the folks at Lineage OS (a custom Android distribution) made an excellent guide.
Once you have adb installed, you need to open a cmd on your computer and enter the command adb shell pm uninstall bitpit.launcher before hitting enter. That'll completely remove all remaining traces of Niagara Launcher.
Finally, you can easily install Niagara Launcher again from Google Play or with an APK file.