We're proud to have a community that helps so much in the translation process. Niagara Launcher is available in dozens of languages because of your help. To participate in translating strings, please read the following guidelines, and after that, please visit Crowdin, a website to crowdsource translations.

Please follow this link: https://crwd.in/niagara-launcher. Here, you can translate and vote for the best translations submitted by the community. Before that, please read our translation guidelines & terminology.

Use of Second-Person Pronoun

We recommend scrolling through this guide to get familiar with Crowdin's online editor: https://support.crowdin.com/online-editor/.

In this context, a string is a bit of text that can be translated into other languages.

Sometimes, parts of a translation can vary or are referencing other strings:

Use the same placeholder in your translation, and Niagara Launcher will replace %1$s automatically (e.g., "5 apps favored"). The number after the "%" sign is the placeholder's index in the current string, helpful when we have multiple placeholders in the same strings.

If a rearranged version of the sentence sounds better in your language, you could change it; you have to watch out which index corresponds to which term. For example, you could also translate  To agree to Niagara Launcher's %2$s and %3$s, tap "%1$s".

When we look at the first placeholder example, what happens if the user just favored one app? The string would incorrectly read "1 app s favored" instead of "1 app favored". We have to provide multiple variants for the same string to solve this problem, one for each form. We call the singular form "one" and the plural form "other" because it's used in all cases where the quantity is not one. Depending on the language you translate in, it may even have multiple plural forms. If you're translating a string with a placeholder, please check if Crowdin shows you multiple tabs and translate the other forms as well: 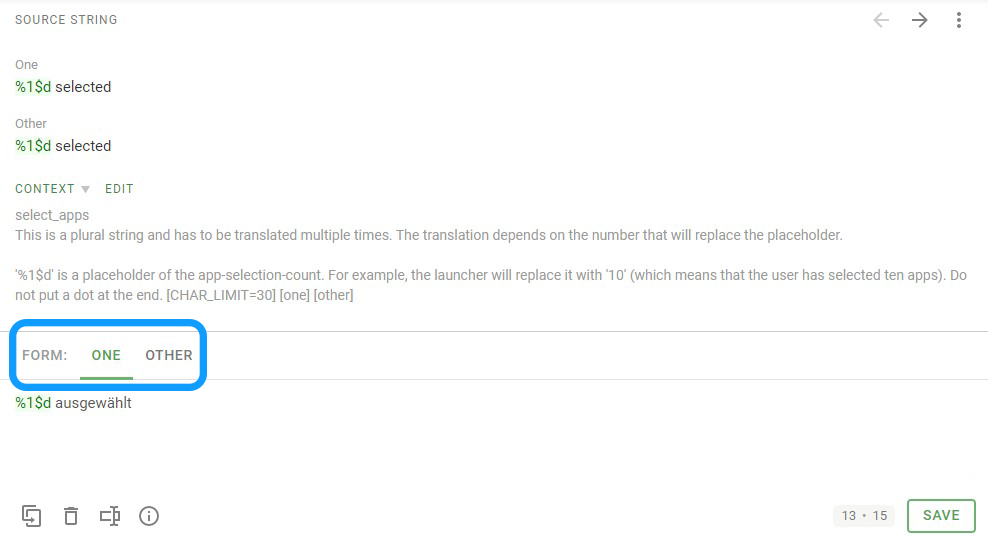 Thank you for your help :)

Can I request you support another language?

Sure thing! Just let us know via mail or on Crowdin, and we're glad to discuss whether we should support the language. We request that the language has at least ten million native speakers to focus on the most spoken languages (see this list on Wikipedia) and justify the effort of managing a new language. Furthermore, we would likely not get enough volunteers to translate thousands of words and keep all strings updated. Moreover, at least 70% of Niagara Launcher's strings have to be translated to be shipped to ensure consistency.